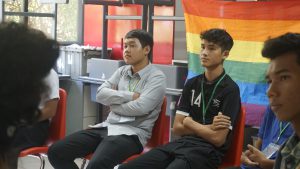 On Sunday the 5th of May 2019, there is an event that was organized and hosted by the Liger students. In this event, the team invited the other four schools to participate in a LGBTQ+ workshop under the discussion of four different topics that are related to the LGBTQ+ community. I, as a participant, really learned a lot from this workshop. From the Language session to Health and Violence to Culture and to Law, the engagement from other participants was really fascinating. I feel attached most with the Language and Health/Violence sessions. Not only we, Cambodia, are lacking in words to depict those people in the LGBTQ+ community, we also have a lacking of specific words in other concepts. With lacking words, we have more chance of generalizing people into a bigger group that they might not belong to. For instance, the words to describe those genders in the LGBTQ+ community are still lacking in Cambodia; we only have one word to depict those different kinds of genders in this community: ខ្ទើយ [kh’taey]. When we have lacking words to describe those different genders in this community it creates a miscommunication between people inside and outside of this community. Aside from the language session, the health and violence session is really sensitive. The session leaders shared us a creative story with the intention to open our eyes and see what are the problems that those people in this community face every day. I really learned a lot from the experience. I hope to see more of the event and the conversation about the topic more in Cambodia. The more we talk the more normal the topic is.

What are the elements can be used to create the saltwater battery?

The electrical battery is the devices that made out of one or more electrochemical cell which is a device that necessary to generate electrical energy or facilitate the chemical reaction to generate the energy. Nowadays, batteries are really common daily in used for flashlights, phones, cameras and many other electrical suppliers. Moreover, there are two terminals on the batteries which are the positive terminal called cathode and the negative terminal called anode. With the electrolytes inside the battery, it allows the cathode and anode to exchange the ions when they move in one direction as they deliver the electricity and it will recharge when it moves to another direction. Currently, the batteries that people use daily are really effective to the environment when they throw it away. So, now people are trying to discover a new type of batteries that have no damage on the environment and sustainable for daily life uses.

Saltwater battery is the battery that has salty water, copper, zinc that attached to each other in the cup. With normal fresh water is very poor to the conductor of electricity but if we add salt into the solution it’ll become an electrolyte solution that can conduct electricity. So by adding salt to the pure water, when the salt or sodium chloride dissolved, they separate into different electrically charged atom which is called ions; when the salt is dissolved in will turn into the positive Na (sodium) ions and the negative Cl (chloride) ions. Additionally, electricity work through the negative charge and positive charge in the battery. Normally, we use copper wire in the electrical product; copper is a type of metal which it can conduct electricity really well. Zinc more readily to loses electrons than copper, so if we place zinc and copper metal in solutions of their salts can cause electrons to flow through an external wire which leads from the zinc to the copper. So in the middle of the solution, we can place a LED light to test, you will see the light is gleaming.

The zinc will lose their electrons to try to balance their atoms, so the copper will receive the electrons from zinc which in that process there is electricity between both of it.

Step to Build the Experiment:

Step 1: Filled the beakers with 200 mL of fresh water each.

Step 2: Add 3 tablespoons of table salt to those beakers.

Step 3: Connect the alligator clip one side to the zinc coins and another to the copper plate.

Step 4: Place the coppers plates and zinc coin in the beakers (in one beaker there should be one zinc coin and one copper plate that not touch each other).

Step 5: There should be one beaker with the only copper plate and one with only zinc coin so place the remaining copper and zinc to the beaker where it missing.

Step 6: After placing the two remaining component there should be two sides of the alligators clip left.

Step 7: Connect the two side of the alligators clip to electronic devices such as LED and voltmeter to find how much the salt battery can conduct. 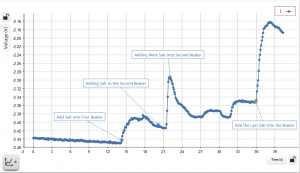 The data show that when we added more salt into the water the voltage is increased at the same time.

According to the data above, in the result, the salt water battery is able to conduct a small amount of electricity. The graph shows that the voltage is increased over time when you add more salt to the water. Moreover, after the voltage is increasing it often falling back for example in about the 22 seconds the voltage is increasing but look at the 27 and 30 seconds the voltage is falling back. Even though this is a few voltages that the salt water battery had conducted, you can say that if you were to design it on a larger scale it may run for a whole house or classroom light. Additionally, if you look at the LED light that attached to the solution you can clearly saw that it actually glow. So when zinc loses electrons and the copper gain one, and if we place zinc and copper metal in solutions of their salts can cause electrons to flow through an external wire which leads from the zinc to the copper. The electron that flows from zinc to copper will create the current and will to be electricity.

I had learned in investigation class, in this expertise we were doing experiment about some science. We have seven weeks to learn and make a report to show our teacher. Here is my report:

Question:
What is the highest temperature of cooking with Solar cooker can get?

Background Information:
Cooking is the art, technology and craft of preparing food by the using up of heat. Cooking is a unique technique that people all around the world like to do and learn. There are many type of resources that people around the world use for cook, such as grilling food over an open fire to use electric stove, to baking in different type of oven, using solar cooker and more types of cooking resources. Also there are many chiefs in many restaurant around the world that cook food to serve to the quests. The scientist says that there are people in the past 250,000 years ago has been cooked food with fire even though there were a research that says the first fire was appeared in the past 400,000 years ago. In cooking method we have different types of cook, it include baking, roasting, frying, grilling, barbecuing, smoking, boiling, steaming and braising. Our project is about the solar cooker. Solar cooker is a device that uses the direct sunlight to heat, cook food or drinks such as milk. Even though there are many type of powerful and expensive cooker that cooks for a hundred peoples, solar cooker is no use of fuel so that not going to affect to the environment. Also the solar cooker is helping many chief to save their money of spending for buying fuel and does not affect their health. There are many types of solar cooker that had appeared on earth such as curved concentrator solar cookers, solar ovens, penal cookers and among more of them. The solar cooker morality is to concentrating sunlight, converting light energy to heat energy and trapping heat energy. But although the solar cooker only can be use under the hot sunny day, it cannot be used under the cloudy day.

Tips:
Find the sunny place
Face your cooker toward the sun.

Results:
After doing our experiments many times we find out that our product didn’t work well with our pod so we need to design the new product to keep more heat inside the pod. We should make the solar cooker that can keep more heat and for our product we can only react to about 4.56 degrees celsius.

Conclusion:
In conclusion we need to change our design so that it can trap more heat. The temperature only can reached to about 40.56 degree celsius. So we find out that our hypothesis is quite wrong, our design help to save energy from cooking with gas but it take much longer time.

My Independent Discovery is to desalinate salty water to drinking water because there a lot of salty water and not enough drinking water. Desalination salty water to drinking water is to move salty water into the drinking water. Some of the desalination are filtering the minerals, interesting rocks and other types of crystals. I want to make this discovery because on earth there are not enough clean water for people and animal to drink. In the first three weeks I learn how to make the model of the desalinate machine and learn the basics of how it works. Then I take some materials to do a evaporation desalinate using evaporated water. First I don’t have any salt water so to do this I need to mix the water with the salt to make it salty then I serve it to make it mix together. Then I use the black plastic bags to cover the top and put the plate in the middle of the container that I use to put salty water. I tie the plastic to the container and put some rock to make it face down for the fresh water go into the plate. After a week I use the tasting machine call TDS EC to check my experiment but my experiment doesn’t work at all. I try many time but it can’t so I went back to check the basic of it again. I want to help the world with my idea. 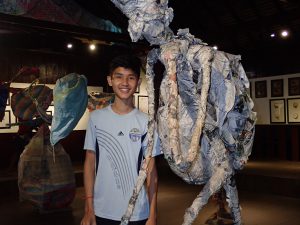